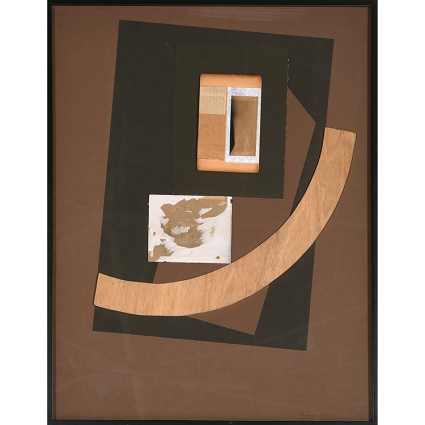 Louise Nevelson, born 1899, was an American sculptor best known for her monochromatic wooden assemblages. During the 1950s, she began to create unique arrangements contained in wooden frames amassed from a range of found objects—usually woodcuts or bits of furniture—that were then painted a uniform black, white, or gold, as seen in her seminal work Royal Tide I (1960). “I think most artists create out of despair,” Nevelson observed. “The very nature of creation is not a performing glory on the outside, it's a painful, difficult search within.”

Born Leah Berliawsky on September 23, 1899 in Pereyaslav, Russian Empire (now Ukraine). Her family emigrated to the United States a few years after her birth, Nevelson moved to New York in 1920 and enrolled in the Art Students League in 1929. She went on to study with Hans Hofmann and worked as an assistant for Diego Rivera before her first solo at Nierendorf Gallery in 1941. The Whitney Museum of American Art in New York gave the artist her first retrospective in 1967.

Nevelson died on April 17, 1988 in New York, NY at the age of 88. Today, her works are held in the collections of the Tate Gallery in London, The Museum of Modern Art in New York, the Art Institute of Chicago, and the Walker Art Center in Minneapolis, among others.